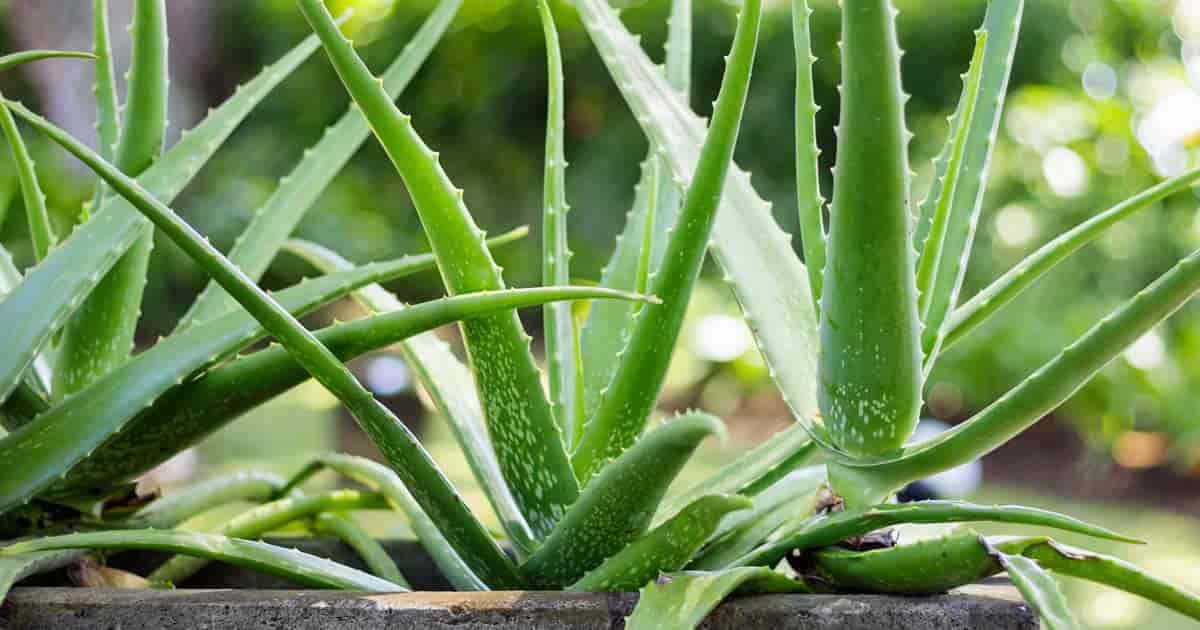 What is Aloe Vera:

Aloe Vera is a juicy plant species of the genus Aloe. An evergreen plant, it originates from the Arabian Peninsula but grows wild in tropical climates around the world and is cultivated for agricultural and medicinal uses. Aloe vera is a stemless or very short-stemmed plant growing to 60–100 cm (24–39 in) tall, spreading by offsets. The leaves are thick and fleshy, green to grey-green, with some varieties showing white flecks on their upper and lower stem surfaces With a total of 420 various plant species of Aloe vera.

The name aloe vera was derived from the Arabic word “Alloeh”, meaning a “shining bitter substance” and vera came from the Latin word “vera”, meaning “true”. For years, aloe vera has been widely used in several cultures – Egypt, Greece, Mexico, India, China, and Japan. Aloe vera is a medicinal plant that’s been used to treat various health conditions for thousands of years. 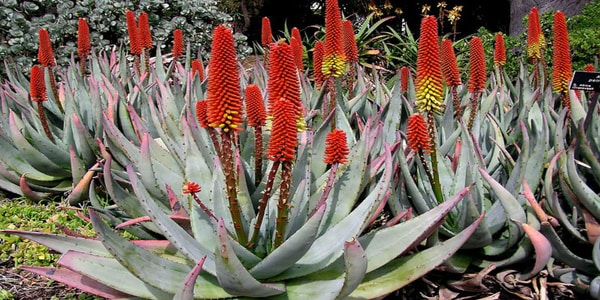 Aloe petricola or also Stone Aloe has vibrant red, orange, and yellow flowers. This is very unique, which makes it easy to identify. It will be a great addition to any type of garden. Stone Aloe also improves air quality and is often used to help heal minor burns and wounds. 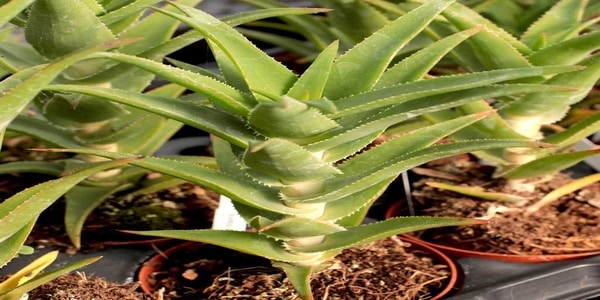 Aloe ciliaris got its common name, Climbing Aloe, for its ability to climb to grow long up to 5 m (if supported correctly). It has large orange and red flowers, so it’s also easy to differentiate. Climbing Aloe attracts sunbirds and bees, which is great for enhancing the environment around the plant. Climbing Aloes bloom all year round, and if supported, it’s a good choice for a houseplant. 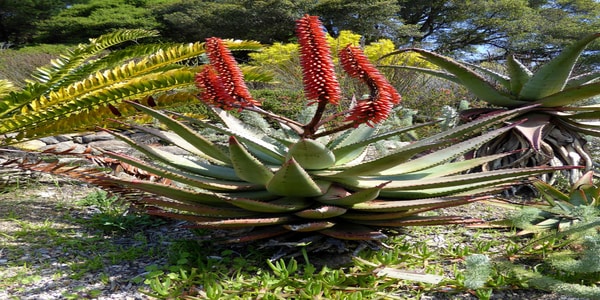 Commonly known as Cape Aloe, Bitter Aloe, Tap Aloe or Red Aloe, this species is very popular because of its bitterness. Bitter aloes are useful for skincare and medicine. It grows red flowers that grow 1-4 feet above the leaves. Many well-known cosmetics use this particular aloe because it nourishes skin naturally. 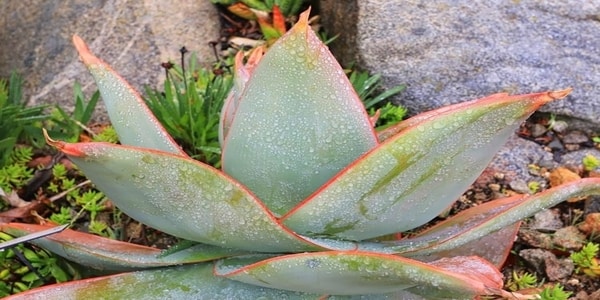 Because of this Aloe’s pink tint or margin on blue-green leaves, Aloe striata is called Coral Aloe. Though sometimes it is mistaken with another Aloe plant (Aloe stiatula), it’s very different. Coral Aloes are very strong. They can survive in very dry and hot environments. It is a beautiful succulent, and it great for healthier air. 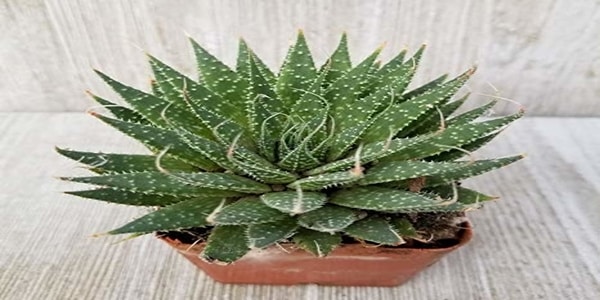 Aloe aristata is commonly known as Lace Aloe and Guinea Fowl Aloe. It’s a stemless succulent and has unique white speckles. It has deep green leaves and grows red-orange flowers. Its large flowers, which can be up to 20 inches, attracts a variety of birds, insects, and bees. It’s helpful to other plants around it. Its therapeutic roots are widely used in making healing medicines. 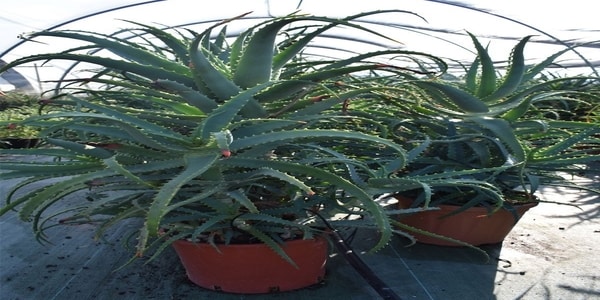 Candelabra Aloe can grow up to 10 feet tall, like a small tree. With multi-headed sprawling succulent that grows bigger than most others of its kind, it resembles a candelabra. It produces vibrant red-orange flowers and the flowers rise high above the leaves for a unique appearance. Studies have shown that Candelabra has substances that can fight harmful organisms. 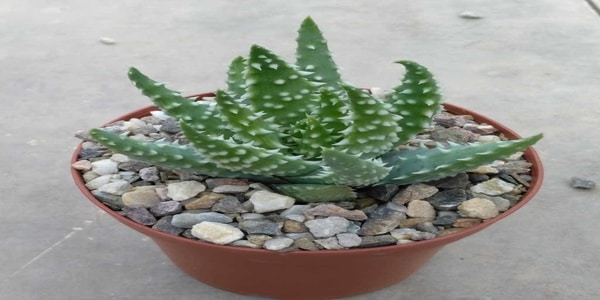 Aloe humilis has long and triangular leaves with white speckles, which grow and take the form of a rosette. It grows red, orange, and yellow flowers. It is one of the popular choices among gardeners. It looks very good with red and orange blooms. Its gel is an effective medicine for sunburn.

Aloe vera gel is packed with vitamins. It contains B-12, which helps make DNA, and also maintains blood and nerve cells. The gel contains folic acid, which makes new cells and prevents birth defects. It has choline, which transmits nerve impulses in the body and sends signals between the cells. It also contains vitamins A, C and E, which are antioxidants. Antioxidants protect cells against damaging free radicals, molecules that damage the cells and cause heart disease and cancer.

Minerals are vital to humans, and they found in aloe gel. The gel contains a minimum of nine minerals, which are needed to make enzyme systems and metabolism function properly. Among the important in aloe vera are calcium, zinc, selenium and magnesium, all essential for metabolic functions; and chromium, which enhances the insulin that provides cells with energy. It also contains copper, manganese, potassium, and sodium.

How To Use Aloe Vera: 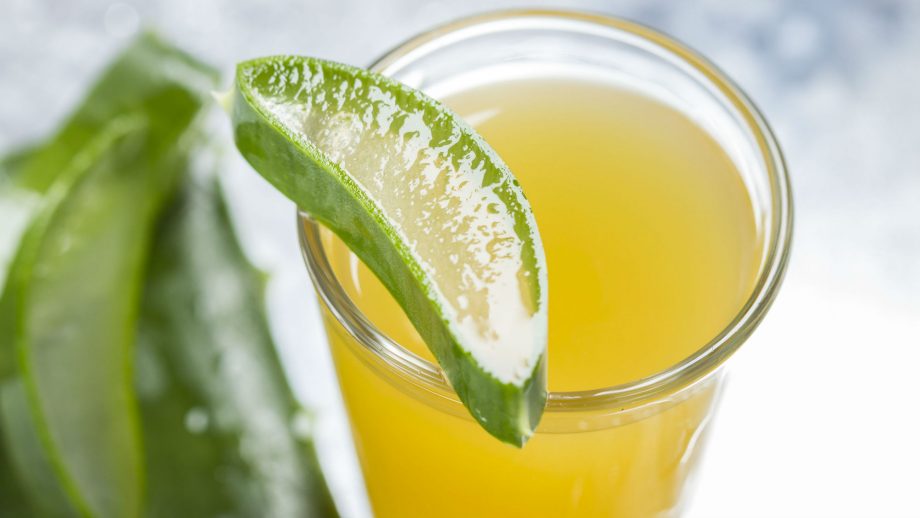 Aloe vera juice is extracted from the green outer leaf of the aloe vera plant. It’s made by crushing the plant and filtering out the liquid. Naturally, it tastes bitter and is slightly thicker than plain water.

A study showed that it significantly improved symptoms of IBS when compared to a placebo. No adverse effects were reported, though more research is needed using a larger study size.

Additionally, aloe vera also stops the growth of bacteria, which is found in your digestive tract and can lead to ulcers.

Ingesting two tablespoons of aloe vera juice per day can cause blood sugar levels to fall in people with type 2 diabetes, according to a study trusted Source in Phytomedicine. This could mean that aloe vera may have a future in diabetes treatment.

Drink aloe made juice to relieve gastrointestinal disorders like indigestion and to relieve heartburn, arthritis and rheumatism pain.

Aloe Vera As a Gel: 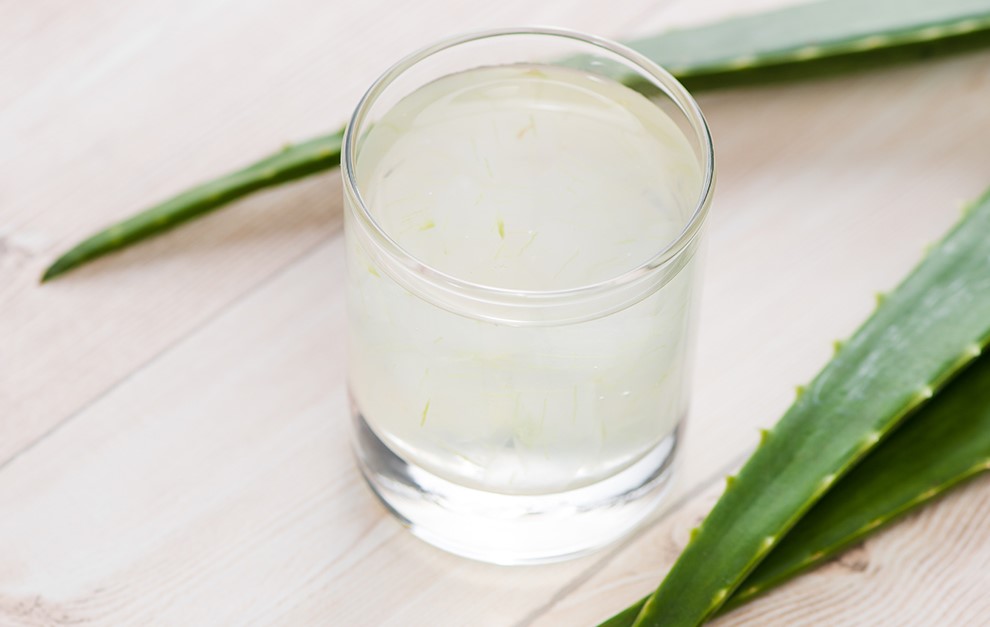 aloe vera gel is a green jelly-like substance which is found inside the leaf and by breaking open the leaf, gel is coming out.

If you have a sunburn or another mild burn, apply aloe vera a few times a day to the area. If you have a severe burn, seek medical help before applying aloe.

Apply a good amount of aloe gel on your feet, massage until it gets absorbed and then put on socks to moisturize the feet. In winters you can add aloe vera gel to your foot cream or petroleum jelly for super soft feet.

It can be a moisturising agent not only for the skin but also for the hair. It is gentle on hair and also easy to wash off. If your hair feels dry and rough, aloe vera will come to the rescue. Grab your aloe vera gel and smooth it over the hair strands to cover well. Let it sit for 30 mins and wash off to reveal soft hair.

The aloe vera gel can be a natural substitute for shaving creams or gels. It is gentle on the skin and will give a smooth shave while also moisturising the skin. The antiseptic properties also make it great for nicks and cuts while shaving.

This versatile gel can double up as your makeup remover. It’s natural, gentle and can be used on sensitive skin too. Use it to remove eye makeup without any fear. Just take a drop of aloe vera gel on a cotton pad and wipe away makeup from the skin.

Usage As a Medicine: 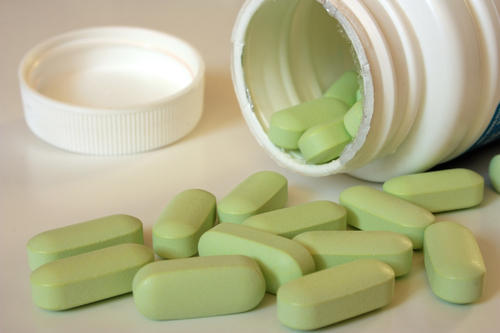 Aloe vera is also used as a medicine in both ayurvedic and allopathic medicine.

Benefits of aloe vera as a medicine:

“Aloe vera contains agents known to help inhibit fungi, bacteria, and viruses. It helps speed healing of wounds, including first- and second-degree burns and also fights with bacteria inside wounds.

It is as effective as toothpaste in fighting cavities. Also found that the gel was just as good as toothpaste, and in some cases even better than the commercial toothpaste at controlling cavity-causing oral bacteria.

Germany’s regulatory agency for herbs – Commission E – approved the use of Aloe vera for the treatment of constipation. Dosages of 50-200 milligrams of Aloe latex are commonly taken in liquid or capsule form once daily for up to 10 days.

Due to the ingredients in aloe vera that prevents inflammation, it has been used to soothe insect bites. Also, when applied to the skin, it acts as an antipruritic which reduces or prevents itching.

How To Grow Aloe Vera At Home:

Here are the steps to grow aloe vera plant at your place:

1- Cut the leaf at the base using a sharp, clean knife. Try to cut at a downward angle, towards the stem. The knife must be very clean, or you risk infecting the leaf.

2- Leave the leaf someplace warm, long enough for a film to form over the cut part. This can take as little a few days to as long as two weeks. This film will help keep the cut part from getting infected by the soil.[3] An infected Aloe Vera leaf won’t survive for very long.

3- Find a pot with a drain hole in the bottom. Like most plants, Aloe Vera likes water, but it hates to sit in it. If your pot does not have a drain hole, the soil will stay soaking wet. This can lead to root rot, which can kill a plant—including the hardy Aloe Vera.

4- Fill the pot with cactus soil, and dampen it with water. If you don’t have any cactus soil, you can mix your own by mixing one part sand and one part potting soil.

5- Stick the leaf cut-side-down into the soil. Make sure that about one-third of the leaf is in the soil.

The bottom leaves of the aloe plant should rest just above the soil, too. Do not water after planting.

6- Ignore your plant (temporarily). After you’ve placed your aloe in its new pot, don’t water it for at least a week. This will decrease the chance of inducing rot and give the plant time to put out new roots. Until the plant seems to be rooted and happy, keep it in a warm place that receives bright but indirect light.

7- Give the plant adequate sunlight and warmth. Aloe vera plants prefer 8–10 hours of sunlight a day. While they grow best in warm or hot temperatures, they are capable of surviving cooler seasons in a more dormant state. However, they may suffer harm if exposed to temperatures below 25ºF (-4ºC).

Side Effects Of Aloe Vera:

1- What parts of the plant are used in products?

The primary component of the plant used in most products is the leaf, which can be processed in two ways to make aloe vera juice. Aloe vera juice can then also be converted to powder or concentrated.

2- I have a medical condition and have been told taking aloe vera will help – should I take it?

As with any medical condition, you should consult a licensed physician before engaging in any form of treatment, and ensure the practitioner knows of all other prescription and OTC drugs or herbal remedies you may be taking.

The yellow coloured juice just below the outer skin of aloe leaves contains a chemical called aloin and this latex is known to be possibly unsafe for use either externally or internally. The gel of aloe is not toxic but this latex, when consumed, can cause irritation and rashes.

4- How long does it take to grow plant

Aloe vera in the kitchen garden can start growing in 2 to 3 months, but if it is being cultivated on a commercial scale, then the minimum time to harvest the leaves of aloe vera plant is 2 years.

5- What is the habitat of the aloe vera?

Aloe vera plants grow and thrive in tropical and subtropical regions. It is widely distributed over arid and semi-arid zones of the world. The ideal temperature for growing aloe vera is between 13 to 27 C. 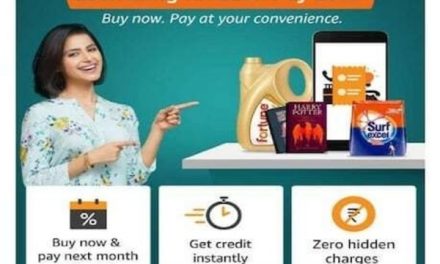 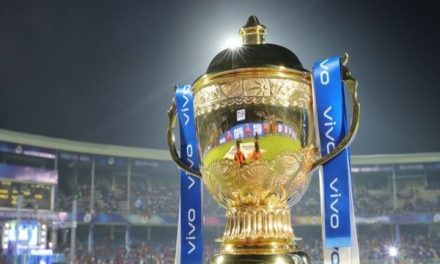 IPL 2020 may get canceled or postponed because of Coronavirus Pandemic 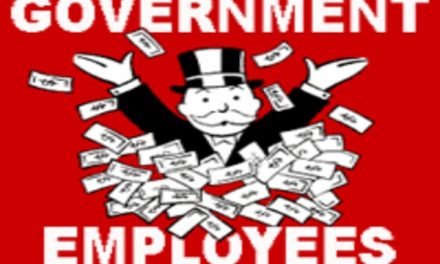 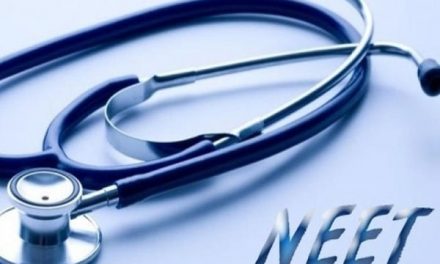